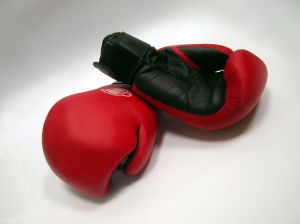 In Florida, when going through a divorce or separation, it is important to get a lawyer that understands the importance of putting down the boxing gloves.
You are ending a marriage and going from love to shuttering at the sounds of her voice or the site of his face, an experienced divorce attorney should take control and guide the client through a constructive not destructive approach. Even though the client may want to “take him for all he’s worth” or “destroy her”, its the lawyer’s responsibility to provide a workable solution especially if there are children involved.
The members of the American Academy of Matrimonial Lawyers have proven that resolutions are often reached without the need for trial. In a 2007 poll, 58 percent of its members indicated that more of their divorce cases over the past five years were settled without trial. Only 12 percent said they were resolving fewer cases without trial. In this present economy, it has been shown that there is a clear preference among middle-income clients to reach agreements without a trial to cut down on the costs of the litigation.
This is not to say that nasty divorce cases are a thing of the past. Not so. In Florida Family, the areas of custody and parenting issues are the highest contested disputes, followed by spousal support and division of retirement accounts.
Due to the new Parenting Statute that went into effect October 1, 2008, the issue of shared parenting should help reduce custody litigation. Nonetheless, the level of resentment the parties may have for one another can drastically affect both the tone and the strife of divorce proceedings.
In the end, there is usually never a true “winner” in a divorce proceeding because of the emotionalism of the area of law. However, your lawyer must be experienced enough to counsel you through the proceeding and to protect your interests from the initial client consultation through mediation to the final hearing. Its important to find a lawyer who doesn’t create roadblocks to settling just so he/she can pay his mortgage by billing you. Once the boxing gloves come off and people start to heal, a workable agreement should be able to be reached for both parties ultimate best benefit.